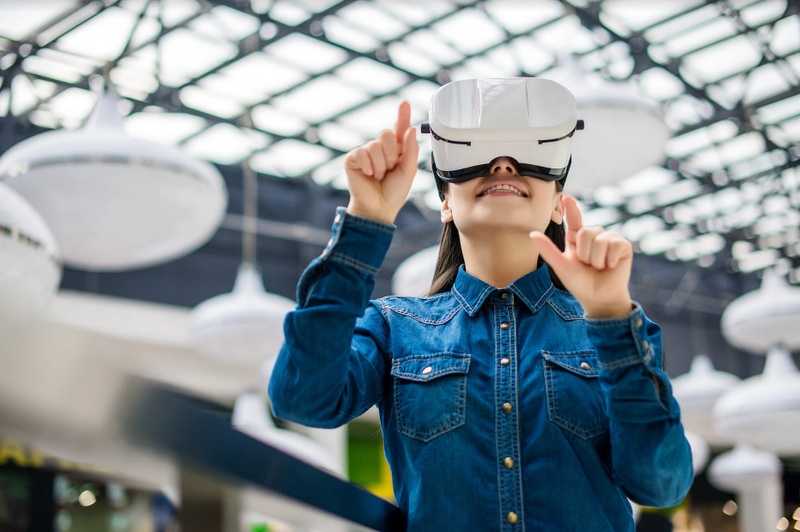 Virtual Reality is seemingly everywhere these days. It’s currently used in a wide array of unconventional, yet brilliant applications, and everything from businesses, to pain management, to retail experiences, and real estate are becoming more dynamic as a result. We exist in an age of experiences, and virtual reality is more and more presenting new and unheard-of experiences. Read on to learn more about modern uses of virtual reality and where this incredible technology is headed.

One of the most interesting aspects of virtual reality is the human-device interaction. Unlike standard, 2D experiences with other digital technology, such as with phones or computers, virtual reality typically requires the use of an encapsulating headset. All other senses are limited and the real world is eliminated. The user is instantly transported into a 3D setting, while the technology is developed to enable users to interact with their surroundings as they would in the real world.

Despite the mystique, however, a large number of people have reported motion sickness while using virtual reality headsets. The condition, known as cybersickness, tends to affect women more than men, and while there are a variety of theories on why it occurs, there is no definitive answer.

Another challenge with human-device interaction has been related to issues of the actual VR headsets. Many users complain of delays in the technology, discomfort when using the large, cumbersome headsets, or the annoyance of images that appear fuzzy. While the concept of VR is nothing short of mind-blowing, we are still at a point where the technology has to catch up to create the experiences we crave.

The History of VR: Where it Was and Where It's Headed

Virtual reality, also known as VR, first emerged in the 1990s but due to lags in technology and an entirely unrefined experience, it lost steam before it even caught momentum. Nintendo and Sega pioneered VR technology, however, Nintendo’s Virtual Boy console was only available for a year, without much interest. Meanwhile, the Sega VR console never made it to market.

How VR is Used in Business Today

Despite its initial applications in entertainment, today, virtual reality is used abundantly in business and many other real-world contexts.

At the present time, VR has been redefined from its original modes. While the concept has always been intriguing, now that the technology has progressed, offering a dynamic and atmospheric experience has truly upped the ante for what’s capable with VR. Businesses have taken note and many are using virtual reality in various contexts to inspire and delight customers.

Some of the ways virtual reality is being used in business include realistic training, tracking customers in retail environments, real estate, and manufacturing sectors like aerospace. For example, Walmart partnered with virtual reality company Strivr, in 2017 to train employees in preparation for Black Friday. The benefits VR offered included not having to interrupt standard operation during store hours to train employees, while immersing employees in settings of bustling crowds and long lines to understand what was ahead. Airbus and Boeing have found VR to be exceptionally effective for developing models and simulations of their designs, eliminating the large expenses associated with developing prototypes.

Another sector tapping into the possibilities of VR to improve performance is the NFL. Also using the innovative technology from Strivr, the NFL has implemented virtual reality in training and as a supplemental preparation tool for players. VR has enabled players to work on specific movements and reps through consistent training in specific plays. The benefit of virtual reality in this context is that it trains players mentally as much as physically, preparing them for what their opponents may be bringing to the game.

Virtual reality has already crept into our everyday lives in the most seemingly mundane ways. VR has even changed the ways we watch movies and play games, and it has made the concept of immersive experiences very much the norm. VR and the closely-related technology AR (augmented reality) are enabling users to alter their realities in the simplest and most casual applications. Consider Snapchat and Instagram live filters that use AR to alter reality in real-time. Further developments with virtual reality can be expected in the education, construction, and medical industries, as there is no end to the possibilities with this technology.

Virtual reality is a young industry itself, and its future is sure to be interesting. While the technology is continuously developing in innovative ways, the many uses of VR are extending into new territory all the time. Advancements expected for VR include:

Some of the ways virtual reality is expected to expand include virtual shopping - to present in-store retail experiences virtually; education to bring real-life experiences to students easily; and even in fitness, to make the experience more interactive and immersive to inspire action. In the near future, we expect virtual reality to play an even greater role across the board in exciting ways, across a multitude of industries, bringing new insight to the everyday experience.